While on holiday I had a cheeky run along the cliffs planned as they looked far to inviting to be ignored. I got up early and decided to run along the beach first. The Sandy Bay beach is so called as it’s a three quarters of a mile stretch of “picture postcard” golden sand. The cove is around the headland from Exmouth and at 7.30am with hardly a wave in sight it was a pleasure to run on.

Once I’d run up the steep but short beach path I was onto the headland and heading out of the caravan park. The reassuring wooden coastal path signs soon pointed me in the direction of a narrow track that ran along side the cliff edge. The highest point of the cliff is West Down Beacon which is one of the series of beacons that were set alight, along the coast, to warn if the French were invading at the time of the Napoleonic wars. Today it was only me 🙂

The first photo below shows the reason I wanted to run here as it’s a good old slog up to the top. I had amazing views in all directions, not least the sheer drop down to the sea !! My aim was to run to Budleigh Salterton and back via the cliffs. The second photo below is the view from the end of the stony beach at Budleigh, looking back to the cliffs that I’d come from.

All that remained now was to run back along the narrow track with the sound of the sea gently lapping on the stones, the sent of the warm air blowing across the fields and the sight of the sea stretching out for miles towards the horizon. It was only 8 miles but this is why “irunoffroad”. 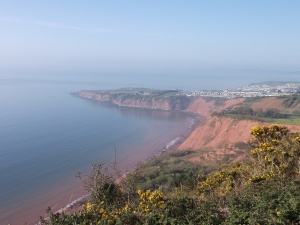 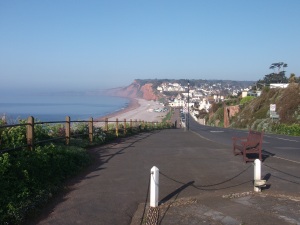