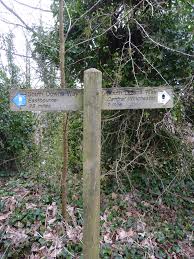 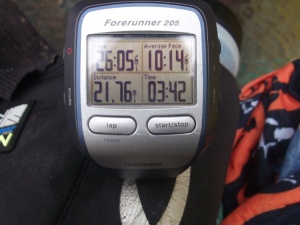 Our long awaited 22 mile run back from Winchester started with my alarm clock going off at 5.15am !! With my kit spread out in the lounge like I was in a triathlon transition I consumed my porridge with vigour and was off out the door (p.s. I did have a wash) and jogging towards the train station. Ironically I saw Mark running on the other side of the road and we met Craig Goodwin by the ticket machine.

The 6.15am train to Winchester was our transport and in no time we were out of the station and running down Winchester High street. Market traders were setting up for  business and I was looking for that iconic signpost that says 99 miles to Eastbourne !! We crossed the A3 bridge and were in the countryside. I’ve read books and watched videos about the South Downs Way so running from King Harold’s statue was really inspiring. After about 4 miles we left the SDW and started heading south east towards Bishops Waltham.

Don’t ask me how or where we ran over the next ten miles as I relied on Mark Greenfield’s navigation skills from his trusty map and Craig’s army training played a part too. After a while one cops looks similar to another but it’s certainly inspiring not knowing what’s around the next hedge or over the brow of the next hill 🙂

Well trodden tracks, hidden styles, grass turning to bog, running water and stagnant water, short steep hill climbs and long wide open fields led us to the BW main roundabout. Off road again and we came out on the outskirts of Waltham Chase. At this stage after 14 off road miles we decided the pavement was a good option so it was tarmac to Wickham and Mayles lane then a splattering of mud along the deviation line and back to Fareham.

A rewarding mornings running resulted in a training run distance personal best for me. A great run with great company, thanks lads … “Good Times”