Last week I had the pleasure and privilege to attend a talk from Doctor Daniel Roiz de Sa (Dr Dan). The location for this inspirational evening was Absolute Running’s fitness studio. Dr Dan specialises in Sport and Exercise medicine as well as activities in extreme weather climates. Dan is CMO at Gosport’s Institute of Naval Medicine, not that far from our local running shop, Absolute Running (AR). The evenings presentation was wide ranging but with a bias towards his work with the amazing Duncan Slater (athlete & double amputee) on the 250K Marathon des Sables (MDS).

Nick from Absolute Running is always keen to promote local endeavours and especially ex service personnel, so, with Duncan being ex RAF, this is how the evening came about.

Dr Dan has been involved in expeditions to the South Pole with Duncan, Prince Harry and other ex servicemen, various Olympians as they prepared for the Rio games, including Jonny & Alistair Brownlee and numerous other supporting roles for climate related extreme challenges. However, as he mingled with us and wrestled with his laptop I.T. issues you’d never of guessed that he was the key note speaker. It’s often the case that the people who have achieved so much are actually quite unassuming.

As Dan ran through the format of the evening his passion shone through and as an audience, we were captivate by his every word. The second central theme of the night was the charity that Duncan and Dan worked with on this project, Walking with the Wounded . WWTW was set up to help and promote the transition of ex servicemen back into the workplace. The admission money for the evening was being donated and the link above tells you more about their work.

The video below shows Dr Dan’s heat chamber and the special guest who popped down to Gosport to wish a fellow adventurer well. Dan can be seen letting Duncan into the chamber and explaining what to expect !! We learnt that diet, acclimatisation and lots of data was complied to give everyone their best chance possible, no stones were left unturned !!

Dan’s role was not only to complete the 250K (six marathons in six days) but to run ahead of Duncan so as to be there for any medical requirements. The nature of the event is that you are self sufficient with only water being provided throughout the running and tents as your overnight accommodation. This meant Dan’s pack included spare parts for Duncan’s ground breaking prosthetic legs as well as medical supplies, on top of what he needed to complete the race.

The MDS challenge is a constant battle with the sand dunes, exposed wide open flats, temperatures of 40 & 50 C and wind storms. Billed as the toughest footrace in the world the demands of the Moroccan environment would be too much for the vast majority of us but the combination of determination and willpower really came across as Dan showed us photos of dunes that had rope to pull on, because they were so steep !!

Dan left us with no illusions that the organisers will dnf (did not finish) you without too much compassion so this weight of responsibility must have been immense with Dan also trying to mange his own self preservation. Naturally it goes without saying that Duncan’s efforts were bordering on super human as the first double amputee to finish. 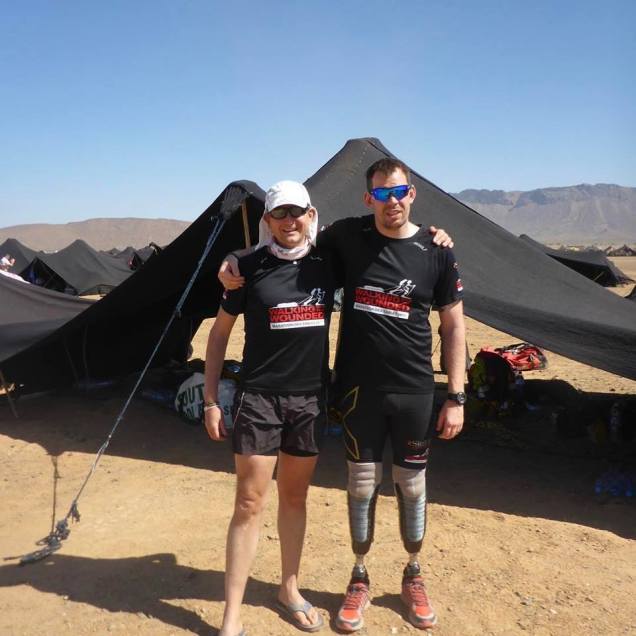 Along with Dan and Duncan local ultra runner James Yeardley from my club Fareham Crusaders had also benefited from Dan’s heat chamber training so it was great to have a chat with him at Fareham Leisure Centre after a Crusaders training night recently.

This blog wouldn’t be complete without mentioning Tom Evans. From the minute Dan told us Tom’s story there was a sense of excitement and real anticipation in his voice. Tom is a Captain in the Welsh Guards and surprised everyone, not least the local favourites, when he came 4th on the first day. Tom eventually finished on the podium in 3rd place which is the best position any European runner has ever achieved. He was running for WWTW and naturally has catapulted himself into the marathon and ultra world with this performance. I suspect Tom will be seeing a lot more of Dr Dan !!

The royal seal of approval was given to Duncan on his completion of the MDS by Prince Harry, so Tom, James and Dr Dan can all say that they beat the desert.

A number of interesting questions were asked at the end and a heart felt round of applause completed a very motivational evening. Thank you Dr Dan.

We finished at 9pm, I said goodnight to a few of the local runners and asked Dan if he was ok with me writing this blog. Thanks must also go to Nick Carter of AR for organising the night and I think it’s fair to say that we all left feeling that we were capable of “so much more” !!

Finally, AR’s Nick has a series of Red Sofa interviews and this 9 minute episode is a measure of the respect and interest everyone had for the challenge that lay ahead.

Feedback ………. thanks very much Tom. 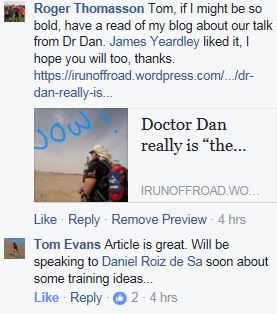