The aim for today’s run was simply to get a descent amount of miles and hills done as preparation for the Second Wind Running (SWR) QE Spring marathon. Seeing as SWR’s Phil & Teresa had organised a 13 mile guided tour of the half marathon route for 10am Paul Coates and I decided the 9am QE Parkrun  would be an ideal addition to our day. The Queen Elizabeth Country Park (QECP) is one of my favourite places to run what with it being in the South Downs National Park and only 13 miles from home. The Forestry Commission people had been logging recently so as well as the mud, hills and chalky paths we also had to keep an eye out for where their machinery had churned up the soil.

Park run wise there were 69 runners (I checked the results) taking on the two laps that make up the 5K. Temperature wise we started with misty fog that lingered between the trees giving us quite a spooky atmosphere. I bumped into Phil Prophett from Fareham Crusaders and found he was also running both the parkrun and recce.

Well done to Race Director Katie from Liss Runners and James at the 3K marshal point who was volunteering for the 100th time. It’s both a challenging and beautiful 5K route through the forest but today I limited myself to 9 minute miles. Paul’s 23.01 was good enough for 10th place on the day.

Meeting up with Phil and Teresa at the QECP centre there must have been about 15 of us for the 13 mile loop that makes up half of the March 26th marathon. I was pleased to see Mark Lee who had come up from the New Forest and who we know from previous runs. The banter between Phil, Paul & I started almost immediately as we haven’t seen each other for a while. 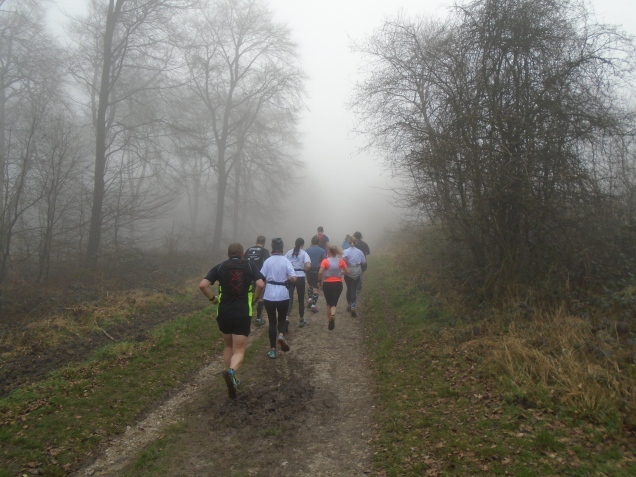 I knew from previous experience that the first 2 miles are quite steep so we made a steady start, climbing in elevation, and running into the hanging mist. It was apparent fairly early on that regrouping would be the order of the day but that’s what running with a group is all about. No one should ever apologise or say “sorry for slowing you down” because all miles are good miles, regardless of the speed. Conditions underfoot were reasonable with sections of mud rather than it all being muddy !! There was a great atmosphere with everyone chatting when the terrain allowed it 🙂

Dropping down through the park we reached where the first water station would be at about 4.5 miles. This water station is of note because after it there’s about a mile climb back up through the trees which tested us all. Those that knew about it could afford a smile and some light hearted comments, the rest realised it was a test when the chat quickly turned to silence as we got going. Once regrouped over the other side we encountered our first real mud. 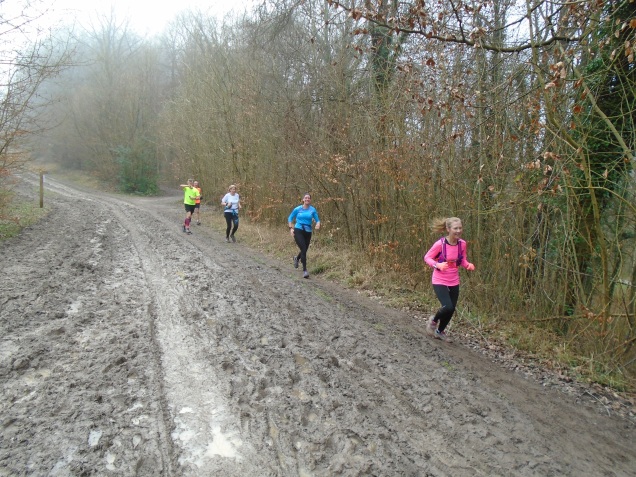 As we re-joined the South Downs Way we bumped into Aaron from Fareham Crusaders out on a Saturday morning walk. Pressing on there was a pleasant downhill section which would only mean one thing, yes, another uphill section which by now was taking some prisoners, from a walking point of view, but again this is inevitable as well as understandable. We took a quick drinks pit stop and all agreed what a beautiful location we were running through. It was also noticeable the sun was trying to shine through too.

Setting off again we were making our way towards Chalton were one of the ladies needed to rehydrate at the Red Lion pub. A pint of squash seemed to do the trick and the rumour was that some alcohol was consumed, as well, but I couldn’t comment because I wasn’t there 🙂 The Staunton Way took us back towards QECP. This is a good mile long and the style that takes you back into the park can be seen from quite some distance away.

Tersea took great pleasure in commenting that she was way ahead of Phil on a hill which is a comment that few of us have ever been able to make !! That’s Phil in the distance with the orange top making sure everyone was being looked after. Or had he been in the pub ?

We were within 1.5 miles of the finish now and allowed ourselves a group photo. Sorry I snapped you with your eyes shut Teresa. Judging by all the smiles even though it had been a challenging run everyone had really enjoyed themselves. Paul and I agreed that SWR put on great running events, whether its a race or a recce. I enjoyed meeting Phil from the Crusaders who I didn’t know before, as well as Mark. The added bonus was lots of new runners I’d never met before. Caroline, Nick, Emma & Co. I hope to see you on the  trails again. 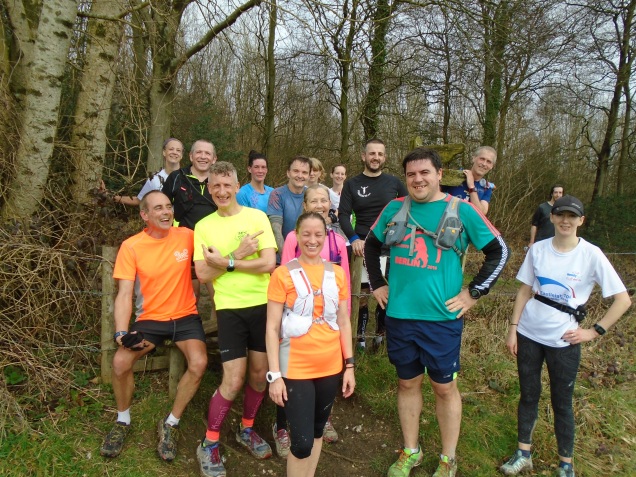 In total today was 16.5 miles “logged” with great company !!