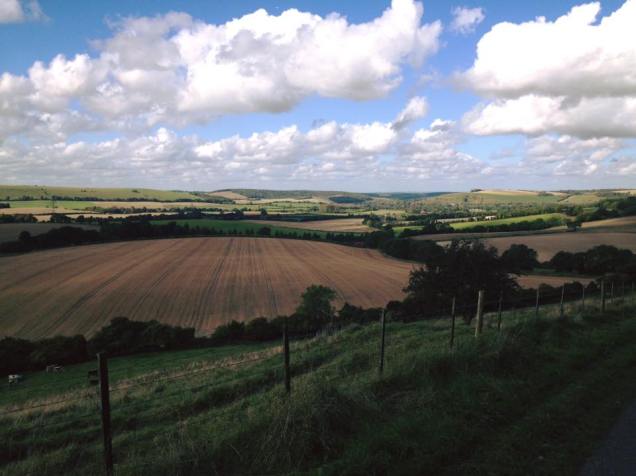 The Run of the Downs
By Rudyard Kipling
THE WEALD is good, the Downs are best
I’ll give you the run of ’em, East to West.
Beachy Head and Winddoor Hill,
They were once and they are still.
Firle Mount Caburn and Mount Harry
Go back as far as sums ‘1l carry.
Ditchling Beacon and Chanctonbury Ring
They have looked on many a thing,
And what those two have missed between ’em
I reckon Truleigh Hill has seen ’em.
Highden, Bignor and Duncton Down
Knew Old England before the Crown.
Linch Down, Treyford and Sunwood
Knew Old England before the Flood;
And when you end on the Hampshire side –
Butser’s old as Time and Tide.
The Downs are sheep, the Weald is corn,
You be glad you are Sussex born! 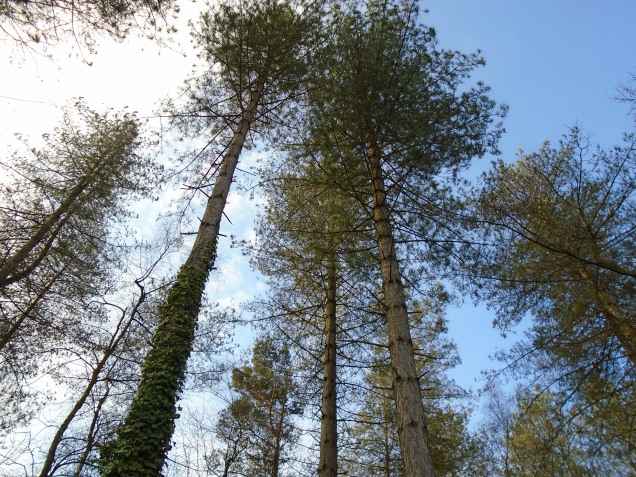 This Forestry Commission (FC) site has a network of varying trails and wooded areas. Some of the trails are well surfaced, some are natural dirt tracks. Once I’d run the more obvious “new visitors” sections I couldn’t resist taking off down a few muddy routes that had no signposts. The Forest of Bere has trees that tower above you and which sway in the breeze as well as more densely planted areas that the sunshine struggles to get through. In short it’s ideal for trail running.

This FC map shows you the layout and the three pay and display car parks. The main car park at West Walk has toilets and running water (always useful) then there’s small car parks at Woodend and Upperford Copse which lead down to the Meon Valley Trail (MVT) . The links above will give you loads of information from their official website. Once I’d been running for a while I also noticed a food and drink mobile shop had been opened up by the Great Big Food Company who are locally from Wickham and offer quite a selection of drinks and snacks. They are there at weekends and school holidays. 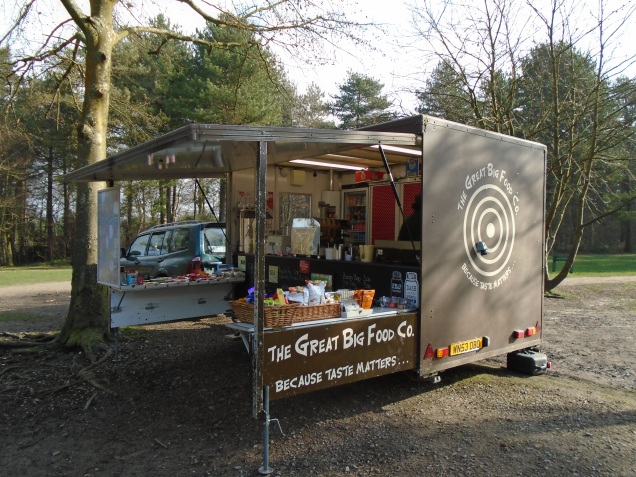 The first trail I ran was the signposted route from the main car park through the two others and down to the MVT or as some may be more familiar with it, the old Wickham railway line. These trails were a combination of compacted gravel and occasional mud. Mileage wise it was about a 5K round trip.

My second route was the old oak trail on the other side of the park which has some of the oldest oaks. The trail was a lot more demanding with boggy sections and narrow tracks. Once back at the West Walk main junction of trails I set off down quite a steep hill, did some 600m reps, and then followed the circular route back.

Next it was time to go “off piste” and try some muddier and quieter routes. I largely relied on counting how many left and right turns I’d made here because there were no signposts. As I suspected the reward was some great running. You certainly get a better work out when running hills and mud because it’s impossible to keep up an even pace.

Autumns’ leaves have all disappeared and Springs daffodils aren’t out just yet so todays Winter sunshine and the double digit degrees gave you a hint of what’s to come. Dirty trainers may not be everyone’s cup of tea but forests really do have a special feeling. The trees go through their cycle of the seasons and I come to visit whenever I can. Running with views like these made the nine miles a real pleasure.

What’s been the talking point on the South Coast’s running scene recently ? Donald Trump … “No” … Absolute Running (AR), with their trademark “what can we do next” approach, have opened AR Southsea (pictured above). In a clever move that really complements their Wednesday 5.45pm AR Gosport run there’s now a 6.45pm AR Southsea option for a social and all inclusive 5K or 3K.

No. 14 Grove Road South is just North of both Palmerston Road and Southsea’s main shopping area. As I approached the shop those unmistakable grand windows were plain to see as well as a good 25 or so runners all listening to Kim Carter describing the route we would be running. Kim was taking the 3K group and Harry Carter the 5K group. As I opened the shop door David Brawn (sports journalist for The News) greeted me with a hand shake and a “good to see you nod”.

In no time at all we were off into the crisp night air and the streets of Southsea. Our run was mainly along the well-lit seafront people may know from the Great South. I say well-lit because the rows of colourful bulbs that are hung between the street lights give the whole area its seaside feel. We ran along Eastney Parade, past South Parade Pier, around Canoe Lake and then back along Clarence Parade before returning along Kent Road. I chatted briefly with some ladies as we got going and swopped likely upcoming races with David, then concentrated on keeping up 🙂 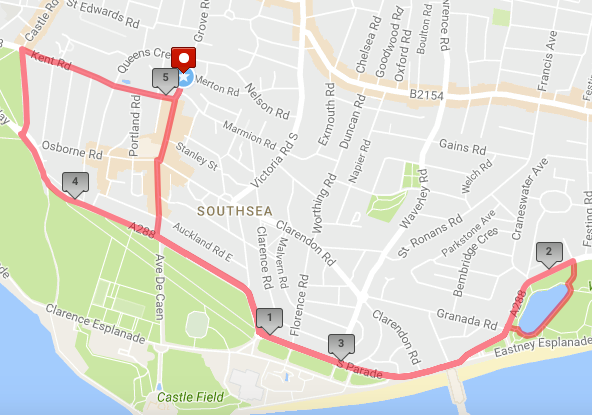 Once back to the shop I was impressed with the smart dark flooring and funky lights in the high ceiling, I also saw triathlete Mick Hawkes and met his wife for the first time too. AR have worked hard on developing their running community spirit and this shone through with us all happily talking to people we both knew and didn’t know. Harry was keen to make sure everyone had a refreshing cold glass of water as well as answering questions on what plans there were for the shop. With tonight’s Wednesday run established the Sunday breakfast run has now also been advertised, all comers welcome. It starts at Greens café , Canoe lake 8.15am for 8.30am, 30 minutes out, 30 back and then maybe add on some eggs & beacon !!

The shop has what you’d expect in terms of a great choice of shoes and related gear but I wasn’t expecting the place to be so stylish. The huge shoe display especially worked well as your eyes were drawn to the array of colours and makes. Naturally the treadmill was there for Harry’s running gait analysis and which shoe would suit you. 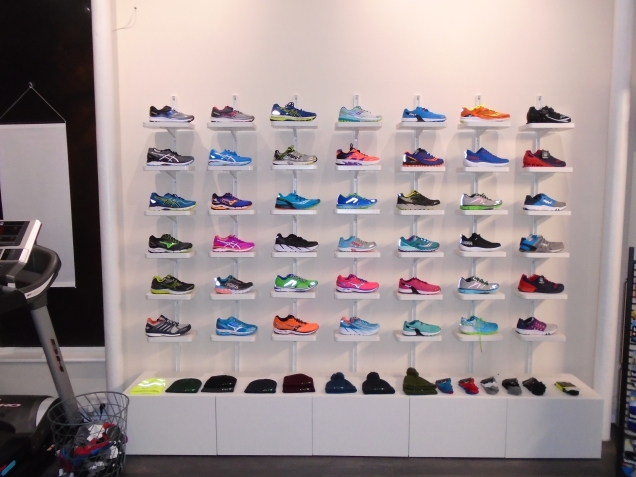 I chatted with Craig from the runr clothing line who I’ve talked to on twitter but not actually met before and as he said, it’s great to actually chat in person. So in summary a great run with great people organised by AR Southsea. Just like those coloured light bulbs along the seafront I’d say the shop has a “bright future” 🙂

I was initially draw to the website with their race directory feature which has a really useful postcode / town, race finder. Once you’ve entered your location then there’s a drop down menu for the range of miles you are happy to travel. The race results are then shown on a map of the area and each race has its details listed.

Naturally they can’t list “every” race but there was a good selection for the area I tried.

The Race Directory can be used without joining up which I thought was a mark of their commitment to getting runners involved.

For this £10 you receive newsletters, discounts from races and a members area that will allow you to learn more about the trails and that’s why I’m now a member of the TRA.

Find a race and go run the trails.

Thanks very much for voting irunoffroad into the shortlisted top 12, out of 80 blogs entered. I really do appreciate fellow runners reading my blog. The fact that this is my second year and my second top 12 makes me very proud.

Thank you and #happy running 🙂

If you read the running magazines you’ll often see various percentages or multiples used to calculate your pace for that all important long steady run (LSR). Building up this solid aerobic base is the cornerstone to your training especially for distance races. What works for one person won’t for another so ultimately I’ve always found the best approach is to pick a few friends and just get on with it.

Today was a good example. Paul had run 18 miles the previous day, I was mindful of a hamstring tweek from ten days ago and our friend Ros is gaining in distance and confidence after some time out. In short, we had 16 miles planned along the South Downs Way (SDW) and no agenda for pace other than to enjoy being out in the countryside and clocking up time on our feet.

Starting from Queen Elizabeth Country Park at 8am we were confronted by thick mist which would largely steal the views on or run but at the same time it gave an unusual outlook on a route we knew well.

I hadn’t seen Ros since December and before her first marathon so it was great to hear her talk about how it went. It’s noticeable how you drop into a comfortable pace when chatting and at the same time the miles just fly by.

Once we’d run the big hill out of QECP there are about nine undulations until Harting Down and the glorious National Trust (NT) land that stretches along the top of the South Downs. A, LSR, will help you develop your own running rhythm which alters according to the conditions, elevation and terrain. Todays conditions underfoot were reasonable even allowing for a fair splattering of mud and puddles.

With the first 5 miles under our belts the National Trust sign was an obvious point for a quick refuel and the photo from the start of my blog. Once onto the NT land the sheltered trails change to wide open areas of grass land.

The wide open spaces are also home to some very hardly looking cows with hairy coats that look like they should be in Scotland rather than Hampshire. Turns out the National Trust are trialling these Scottish cows downs South Galloways 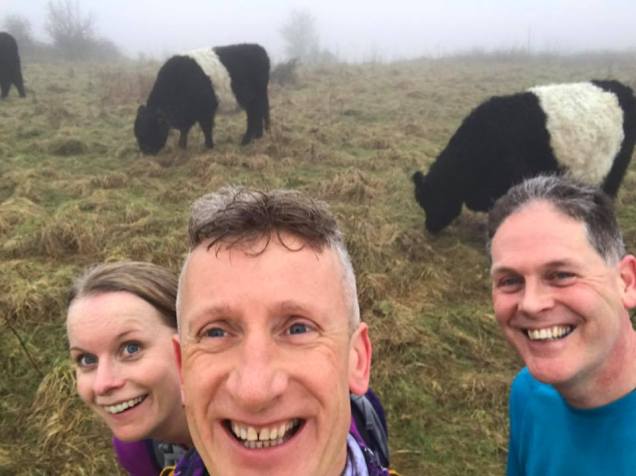 Needless to say the cows had no interest in what we were doing as I’m sure they are used to passers by !! The banter between the three of us is also a key ingredient that helps the miles pass by and I think this photo summed up the fun we had today.

The latter part of our outward leg was down and up a steep chalky trail that’s often photographed by SDW folk. The cattle grid was a reminder that we weren’t alone and as Ros took this photo of me we carried on for another mile or so before heading back.

The second half of the run was slightly slower but again it’s all about listening to each other and gauging how you are feeling. There’s a time and place for speed work but today was all about a steady pace, miles in the bank and knowing that we’d all benefitted.

Naturally you recover quicker from a steady run and this recovery process was helped by a pot of tea in the QECP café where we chatted to three Stubbington Green runners who’d also been out. A lovely run with great mates and 16 miles in the “running bank”.