On a chilly November morning I headed for Staunton Park and the surrounding Forest of Bere and Havant Thicket. Our hosts were On the Whistle and their brand of running which is to map out a lap, 4.6 miles on this occasion, and then you simply run it as often as you like with a 6 hour limit. One lap still gets a medal, 3 laps = half marathon, 6 = a marathon and then you are into ultra running. Today I had 4 laps & 18.4 miles in mind through the lovely Forestry Commission land as a stepping stone towards more.

Upon arrival I soon bumped into Richard Hill, Paul Jeffrey (blogger http://paul-jeffrey.com/) , Brian and Richard from work, Paul Coates (fellow Crusader), Cat Underwood Team MND and Kiernan, one of the 3 organisers who was in an “Elf” outfit. We assembled for the pre race safety brief close by to the HQ/ aid station. With the laps being 4.6 miles only one aid/feed station is required and naturally it was the hub of everything that was going on, food, drink, kit bags etc etc . 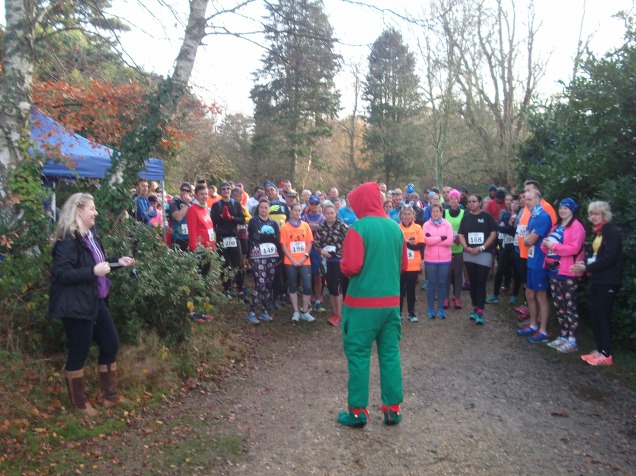 The beauty of a race with laps is that it appeals to a really wide cross section of the running community. The second feature of On the Whistle running is that the lap has sections where you pass each other in opposite directions which is great for motivating each other !!

Once we’d got underway the conditions underfoot were pretty good, compacted paths and very little mud while still running through wooded areas and open heathland, the perfect combination really. Paul and I settled into a steady nine and a half minute miles pace that would mean he could carry on for 2 or 3 laps after me. With the exception of a rant from Victoria, another blogger http://mrsbridgewater.blogspot.co.uk/  about a dog owner, all was unfolding in front of us, Autumn colours, a bright and crisp day, oh, and a fire engine !! Yes you are reading that correctly !! Not what we were expecting. Naturally with Paul previously being in the fire service there was quite a lot of banter between him and them. It also caused quite a bit of interest with the ladies 🙂 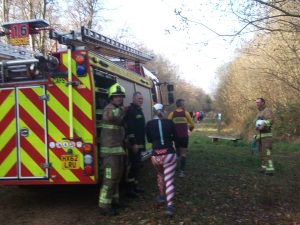 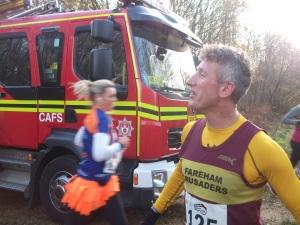 Apparently there are heath fires in the Summer and this was a training exercise. Paul took control of the situation and then we pressed on. The route had a cheeky short hill just before the end of the first lap and then we were retracing our steps. Both Paul and I are always keen to encourage others so there were high 5’s and motivational comments a plenty. We saw Paul, Brian and Richard along the straight section before the course turned left and took a large circular path back to that point again i.e. a lollypop.

By the end of the second lap we took advantage of the two portaloos which wasn’t significant on its own but was to Brian who was just behind us and had to wait, sorry Brian. 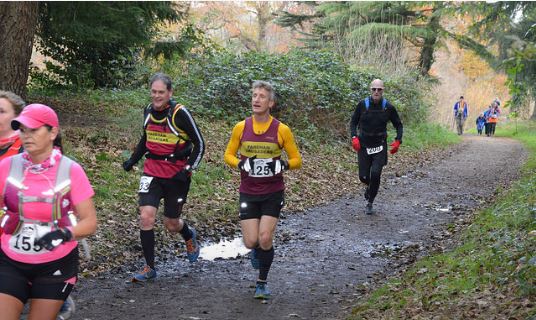 We saw Richard Hill running well and I think it’s fair to say everyone that we saw was in good spirits. By now it was noticeable the temperature was started to drop on the third lap and by the fourth Paul pulled away from me and I settled into a steadier pace. After a couple of more miles Paul was heading back towards me so I took a quick photo and wished him well. He’s a quiet, retiring type as you can see 🙂

On arriving back at the HQ I told Kiernan I was done, the medal was a classic Christmas jumper (see below) !! Not too long after Brian finished the 18.4 miles and even though Paul Jeffrey carried on he joined in the photo. Richard arrived not long after only to top up his drink and set off again. Paul Jeffrey ran 28 miles, Richard Hill (7th overall), Paul Coates (8th overall) and Richard Law (10th overall) ran 32 miles each, great effort lads.

All in all a great days Autumnal running with everyone achieving their goals. Love the medal !! A very successful year for On the Whistle, well done Kiernan, Claire & Del.If you enjoyed reading my blog please vote for it here http://therunningawards.com/vote/109/110#vote Just scroll down through Community, Blog and vote irunoffroad. Many thanks.

Happy Birthday to me, happy birthday to me ..... etc etc Third run in three days, just about to head out #staysafe #centurioncommunity 50K challenge completed today