The video is from the official marathon site and shows the route from the half way turnaround. 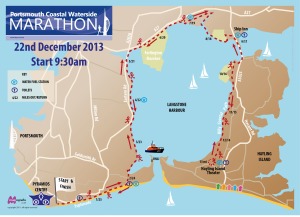 Today’s run was all about building towards, hopefully, a sub 4 hour Barnstaple marathon on September 27th. Fellow Fareham Crusader Rob Morgan joined me today as he is training for the Bournemouth marathon. We set off from Farlington marshes and ran to virtually the turnaround point, at the bottom of the Hayling Billy line. Having run both the Portsmouth and Barnstaple races before I know they are quite similar, in that they use coastal paths and disused railway lines.

The sun was already out at 8am, when we set off, and the views across the harbour meant we could see roughly were we’d be running to, some 7 miles away. A target pace of somewhere between 8 minutes 45 seconds and 9 minutes was our aim. Generally I let the off road terrain dictate the pace but today was virtually all flat, however, there were some rough/technical sections to keep our minds alert.

The track initially runs parallel with the motorway but you are soon on the coastal path with great views of the marshes. The section along the coastal defences needed some care as to placing your feet but we were soon approaching the Hayling Bridge. One of the reasons the railway line closed in 1963 was due to the upkeep of the railway bridge (see above). We briefly stopped at the Hayling Island information sign and then pressed on. The track was compact and easy to run on.

The return leg was quite warm and the shingle around 10 miles added another twist. One noticeable point was that we saw 5 ladies running on their own at different stages of our 14 miles … “Girlpower” and great to see. We maintained our pace and finished at an average of 8-52 so that was spot on. Good to run with Rob and I’m sure we will run again.