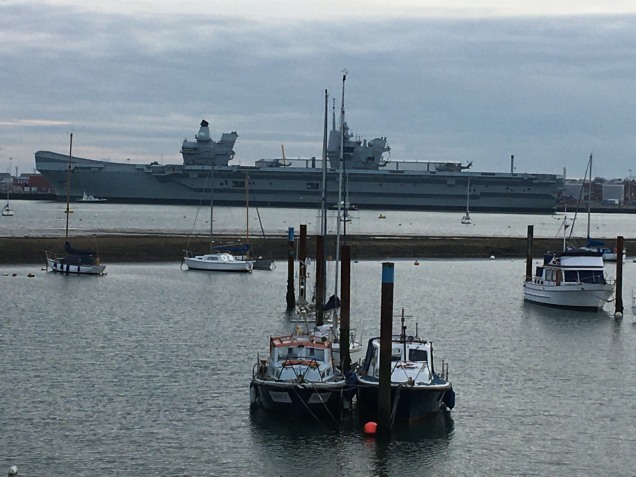 After last weekends eighteen mile run I decided to drop back to fourteen this week and prepare myself for a twenty / twenty one miler next weekend.

With HMS Prince of Wales being in dock at the moment this was a perfect excuse to run down and take a photo, after all its not everyday you see an aircraft carrier !!

My mood has been buoyant after the success of a three hour stint last week and coupled with this I’m into my third week of eating better too. I’m convinced its having an effect as I definitely feel that I have more energy.

I’m taking full advantage of the vegetarian options at work and alternating this with jacket potatoes and side salads. After recently watching the Game Changers Netflix film meat consumption and a plant based diet are topics I’m looking into both for my general health as well as supporting my running.

These small steps I’ve outlined, when combined with taking three pieces of fruit to work as well, can only help !! When I saw a vegan sausage roll in Greggs while picking something up for my daughter I couldn’t resist buying one and I’m pleased to report it was quite tasty. I saw this week that Chris Froome is the latest high profile athlete to follow this route. I’ll keep you posted.

Todays run featured a mile or so of muddy field running and then after that it was flat and tarmac. Now, flat and tarmac aren’t my preferred option but I decided I couldn’t miss the aircraft carrier. My pace was good initially and I was pleased not to drop below ten minute mileing for all fourteen.

After all, ten minute miles will give you a 4.22 marathon and at this stage I’d take that. The early chill meant I ran with my egloves and as the sun began to appear it was one of those bright and cold mornings that keep you focused.

The six miles down to my viewing point were even paced and I saw a number of people driving through Gosport on route to the Gosport Half marathon which, as usual, was fully booked. Congratulations to everyone who ran it.

The return leg of my run meant heading for Stubbington and avoiding the fields because quite frankly I was moving well so I decided to work on maintaining my pace.

It’s gratifying when your pervious weeks efforts seem to be paying off and I kept a steady pace.

As you look at my Strava photo you may wonder why I’ve added the phrase “Jolly Roger” , well I was pleased with my run and as coincidence would have it I’d passed a pub near Priddy’s Hard with just that name. Fait …. ha ha !! 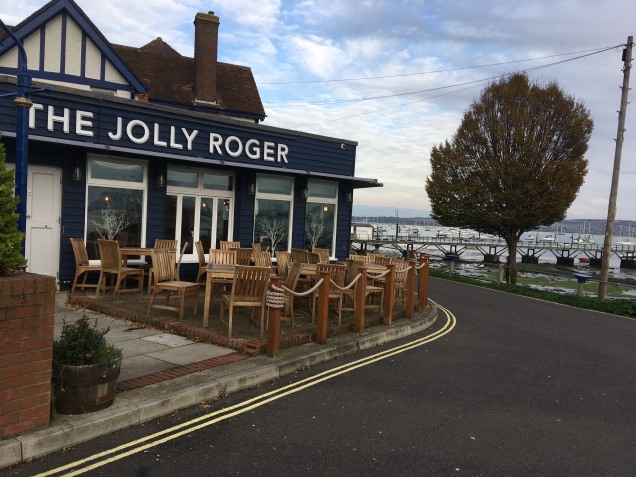 With five weeks to the Portsmouth Coastal marathon I’m pleased with my progress and with the Naval aspect from today the phrase “Full Steam Ahead” seemed quite apt for my blog.

Finally, I’d like to thank everyone that read my “Life Affirming” blog from last week. I had a lot of positive feedback which is both pleasing and hopefully may have inspired others to #getoutside and experience the joys of exercise in the fresh air 🙂

I was impressed with this in a pub on the road to Hayling Island this evening. #respect @absolutegosvegas