My last two blog posts have charted how I’ve turned around quite a few weeks of low motivation for running. It’s great to say I’m back on track.

I finished work a little earlier on Friday because the sunshine was streaming through the office windows. Yes, the local woods were calling me ….. “come and run, come and run”.

I only had limited time but 5K was still on the cards and after the recent rain that run-shine really charged up my batteries, #solar power.

The pace wasn’t great and I’d admit to stopping for a couple of photos but with the late afternoon sun peaking out between the trees it was a joy to be out there.

I often add hash tags like #getoutside #nature and #countryside to my twitter posts and its locations and moments like this that both inspire and motivate me. Running sets you free 🙂

As off road runners we can sometimes take these glorious places for granted but it reinforced why I love what we do and why I enjoy writing about it.

So, that was me fired up for Saturday morning. The alarm went off at 7.30am and I looked out of the window to see thick fog. OK, I’m not going to lie this was a little disappointing after Fridays pre Spring and Summer sun but the fact that I hadn’t spent time pondering whether to get out of bed in the first place meant ….. “the boy is back” !!

I had eight miles planned for the next step in my progression which also included 1,000 feet of elevation. I may have lost some basic fitness but I still have good legs from cycling 🙂

This Strava elevation graphic gives you the basic idea of what I wanted to achieve, and did. 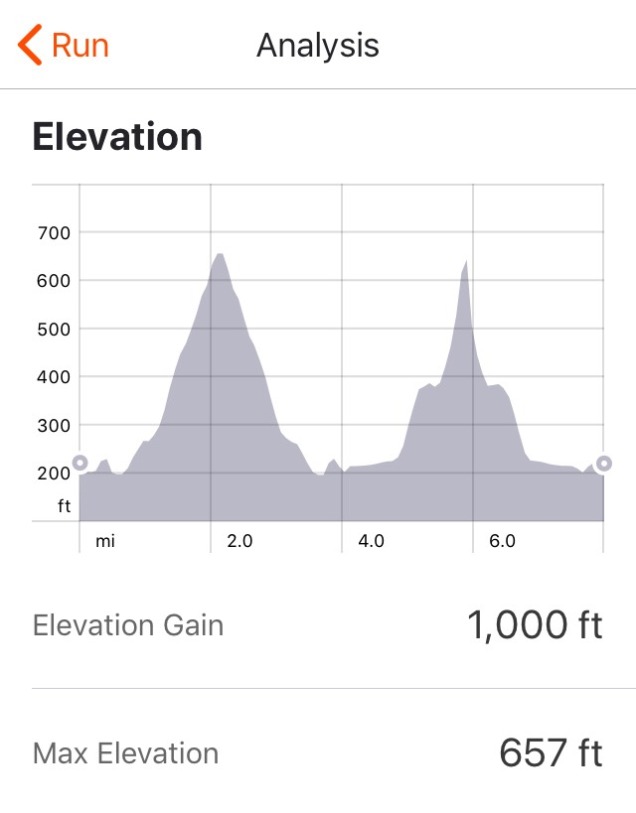 Setting off from Meonstock my first priority was to enjoy it. I headed for Beacon Hill which is on the South Downs Way and is at about 40 of the 53 miles of the Race to the King route.

The race uses a country lane to get to the top so I used this approach rather than the trail alternative. I’m a firm believer in practicing what I’m going to encounter. The heavy mist meant small droplets of water were dripping off the overhanging branches and the rows of vines in the vineyard to my left could only be seen for a hundred metres.

The lane that leads to the trig point ramps up in three different places so the order of the day was slow and steady. I was very pleased to reach the top without walking.

I took this photo on the way back down, no views across the valley but the eerie mist made my trail experience quite different to the norm.

Reaching Exton I set my sights on Old Winchester Hill. I knew it would be muddy and the trail didn’t disappoint. Good traction, balance and feet to eye coordination were all employed to the max. That said I needed to walk through a couple of very boggy sections !!

The final leg of OWH is the steepest and with damp tree roots, care needs to be taken. Once at the top again I was robbed of the view so I settled for a trig photo while I took a drink. The various destinations are mapped out but one was missing …. Rogers route back to running 🙂

Returning to Meonstock I’d bagged eight miles and two trig points but most importantly I was smiling and plotting my next run.

“All blue eyes is back”

Thanks for reading, Roger

10K round trip to the sea and back. March 1st .... we are on the countdown to Spring :-) #running #springiscoming #sea #ukrunchat #hillhead #leeonsolent