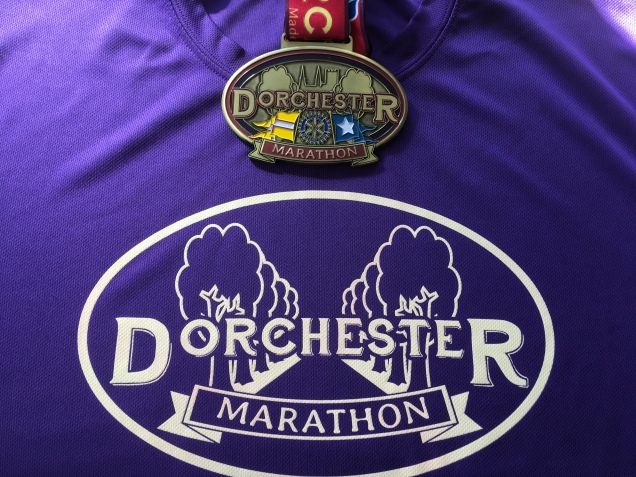 First things first I’d like to thank White Star Running (WSR) and all the other organisations that combined to make Sunday the 27th of May such a memorable day.

Running a marathon is a time consuming undertaking but planning and marshalling one inevitably take a lot longer !!

Why do I sound so enthusiastic about the whole thing I hear you ask, well, for a variety of reasons the Dorchester marathon was my first race of the year, “really”, yes really. The reason I chose to run in Dorset was after watching Film My Run’s video from last years inaugural race. The video was screaming WSR !! The organisation, the humour, the facilities, and the trademark lovestation.

With the marathon start time being 8.30 this meant setting my alarm for 5am, “FIVE AM”. Isn’t it funny how getting up for work at a later time seems a pain but getting up not that long after sunrise, for a race, is a positive joy 🙂

During the hour and a half drive from Hampshire to Dorset the skies gradually moved through the colour spectrum between blue and black. Some 20 miles away from Dorchester the heavens opened and my windscreen wipers were going ten to the dozen. However, the running gods were kind to us because within ten minutes of the start I was hurriedly applying sun cream to my arms, legs and face.

I spotted Andy Palmer “Mr WSR” just long enough before his safety brief to be able to introduce myself and in no time we were lined up. As I scanned the start line I said hello to Fran and Rachel from my Fareham Crusaders and as we got going I also said hello to Emma from Gosport Road Runners (GRR).

The first mile was full of banter and chat as we started the gradual incline of the High Street. I’m old enough to remember when there wasn’t a Dorchester bypass so it was a trip down memory lane for me. The historical buildings were equally matched with the

hysterical fancy dress costumes a number of runners had on. As we turned left out of town I could see Richard Law from Gosport Road Runners. We’d talked earlier this month about running a similar ten minute miles strategy so we ran side by side. I can only put my facial expression down to the quickly applied sun cream getting in my eyes in these initial first few miles … ha ha. Schoolboy error. 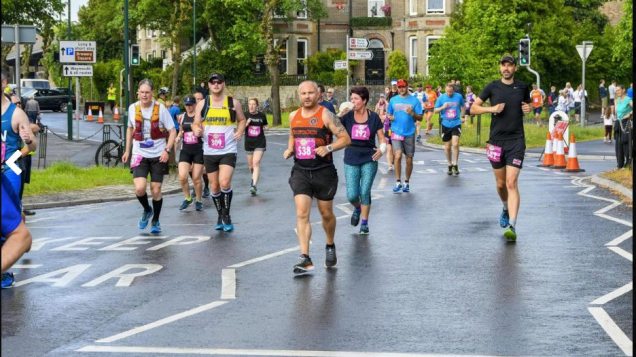 The crowds along the streets were very vocal and there was a real feel good atmosphere. With feed stations every three miles we would be spoilt all day. At around four or five miles the “ever smiling” Phil Hoy from Pompey Joggers overtook Richard and I. Phil had arrived 15 minutes late and was gradually overtaking a large proportion of the field. He eventually came 90th out of 603, hats off to you Phil.

The countryside lanes were starting to warm up as the mornings sun burnt off the clouds and by the time we reached the twelve mile feed station we’d also encountered our first proper hill. This next photo was taken by one of the Bournemouth Joggers and their “Under the Sea” themed pit stop. I thought it summed up the day perfectly ….. hot, hot, hot.

That’s me in the background taking out one of my 500ml soft flaks. I think most of us wore as much of the water as drank it !! I’m not sure what the temperature was at that point but it was 23 degrees by the end.

From twelve miles until the lovestation at twenty the country lanes wound their way through picturesque villages and crops of various descriptions. Due to me not knowing the area that’s about as much of an explanation as I can give, however, this elevation chart from my Strava does add more to it pictorially (is that a word, spell check thinks it is so I’ll go with it).

Miles 16 to 20 were harsh, the breeze dropped, the humidity climbed and I have to admit to enjoying the marathon ever so slightly less 🙂 Richard had moved ahead and fellow runners were becoming much less frequent. Two lads entertaining us with their guitar and double base made for a welcome lift in spirits but it was hard work.

I would compare myself to a contestant on a games show at about 19 miles because I was banking on playing all my cards on the famous WSR oasis that their lovestations are. They came up trumps, food – drink – humour – showers – toilets – music and a genuine “how are you finding it, what can we do to help you” , suffice to say I left with added vigour and almost a spring in my stride (almost), plus a litre of fluids.

It’s surprising how stopping can actually be beneficial.

The long gradual climb at around 21/22 miles gave me mixed emotions, it was tough on the legs but I could also see a string of people ahead of me and all of sudden the prospect of improving my overall position on hills that I’ve trained for felt like a game show host had asked me to “come on down”, yes, “the price could be right” or in running terms, I was getting my second wind.

I caught Richard and a number of others, I also had the advantage of wearing my running vest so I was carrying two 500ml soft flasks while most other runners were stopping at feed stations. I could drink and run (who says men can’t do two things at once). Actually I was doing three things, I was overtaking people !!!

As miles 23,24 and 25 passed with yet more undulations along Slyer’s Lane I passed Jo and two other Pompey Jogger ladies who were running in the half marathon. The final mile was downhill and then it was just a case of squeezing everything I had left out of my proverbial running sponge to cross the line, pick up my medal and t shirt and to be greeted by my cousin Jane who’d kindly come along to support with her husband Peter.

We retired to the shade of the main tent and I apologised a number of times for my sweaty condition. I drank around three litres over the course and didn’t need the bathroom once, that’s a measure of how hot it was.

The Dorchester Marathon did us proud.

Thanks again to all the people that I’ve mentioned and any that have slipped my mind. Today has given me the confidence to enter the South Downs marathon in 3 weeks.