Well, it’s 3 weeks until the Purbeck marathon so it “really” is time to get those distance legs working again. My analogy of “the road to fitness” and more specifically marathon fitness was tested to the full with this churned up trail coupled with the gradual elevation. To be fair this logging access trail only lasted for about 350 metres but it was a great addition to our run.

With the Purbeck marathon having a similar 1,000 meters of elevation to Second Wind Runnings QE Spring marathon (25th March 2018) then 14.5 miles in todays heat was a great tester on the back of 10 miles from Tuesday and 6 from Thursday. The QE Spring marathon has two 13 mile loops so we largely followed one laps worth.

Starting at 8am due to the anticipated heat our first 2 miles included a number of twisting and turning ascents that we well remembered from the race in March, especially with us running up this twice for that marathon. The most noticeable change from March to August (apart from the heat) was how green and “lush” everywhere was. The woods branches had filled out and this certainly worked in our favour with greater shade.

After about a third of our run we passed what has to be the busiest junction in the QECP  woods. With this signpost pointing to the South Downs Way, Hangers Way, the Shipwrights Way and Staunton Way (which we’d pick up later) it was an obvious photo opportunity.

Paul has carried on his relentless quest to race virtually every week so today’s run must have been quite relaxing for him and it was just the push, distance wise, that I needed so as to hit 30 miles this week. Today was also especially beneficial for me as the earlier runs this week have been flat ones so it certainly was a case of “in at the deep end”. Not long after this signpost we came across four Pompey Jogger ultra runners and after a short chat they carried on their way onto yet another trail.

Now, I’m always keen to try different products, both drinks and food wise so today was the start of my Tailwind trial. I mixed 2-3 scoops in 24 oz of water twice, which made up enough to fill my two 500ml soft flasks and a smaller 250ml. Todays hot weather and hills would be a good test and they passed with flying colours. I will update this in future blogs as it would be unfair to just base my thoughts on one run. That said I’m excited to be using a product which so many people recommend. 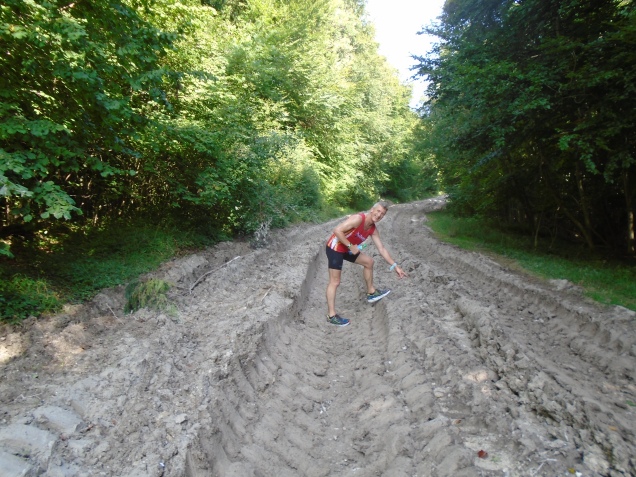 After negotiating the short mud fest which was just as entertaining as it was unexpected we pressed on down New Barn Lane. To our surprise we were met by a number of cyclists on this narrow and quiet country road. The surprise wasn’t the number but the age !! Paul and I often joke we are the Saga branch of Fareham Crusaders running club but a number of the ladies and gentlemen that were cycling uphill towards us were considerably older. Huge respect to them.

We joined the Staunton Way at about ten miles and made tracks for home. This photo gives you another example of why we run in the countryside as well as how hot it was getting !!

I look like I’ve got makeup on but that was simply a combination of suntan lotion and sweat, however, it was the rolling fields and freshly cut crops that I was trying to capture 🙂

By the time we got back to QECP the temperature was up to 23 degrees and a well earned drink was in order. Pace wise lets just say it was “steady”, however, I was chuffed to get back to a testing run and it’s a large thank you to my running buddy Paul for his company.