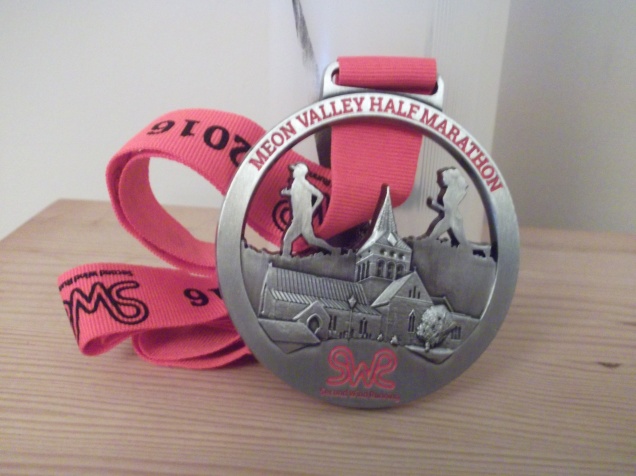 The Meon Valley is a beautiful part of Hampshire, set in the South Downs national park, with rolling hills and a network of trails for us to run. Second Wind Running’s Phil and Teresa are well respected race directors and today they had both a half and full marathon on offer.

The omens for a good day were mounting up what with the fine weather and me bagging the second to last car parking space in the tarmac car park. The temperature was a balmy 2.5 degrees when I arrived and frost was clear to see in the hedgerows that weren’t in the sun. I arrived a little early for the half so that I could wish my marathon friends good luck with their earlier start. Paul, Dave, Kate, Kiernan, Nikki and Dean were all in good spirits.

I chatted with my friend Ros from Gosport RR just before Phil’s 10am race brief which was the usual combination of humour and facts. He warned everyone that race signs had been tampered with the previous day but as of an hour earlier they were in tact. The Meon Hall made for an excellent HQ what with plenty of space, catering and even heating !!

Knowing that the trail narrows quite quickly once we joined the South Downs Way (SDW) I started further forward than I normally would so it was no surprise that Terry Arnott from Gosport RR passed me at about half a mile in with a “morning” and that was the last of him that I saw (he came 10th !! – great running). Conditions meant I started with gloves but these soon came off. The trail was very good underfoot so we could pay most of our attention on the tree roots that the Autumn leaves were potentially hiding.

The winding gradual climb up the lower reaches of Old Winchester hill saw me making reasonable progress ahead of the steep climb. I decided to walk this section as the majority of the other runners were. As we headed away from the hill a group of walkers seemed surprised to see us running but to their credit they encouraged us as we passed them. Crossing the road I saw Paul Jeffrey and his crew, they’d made signs of encouragement like, “well done random stranger” nice one Paul.

During an enjoyable downhill section towards Meon Springs I was first made aware of a fellow Fareham Crusader running behind me. Alan White and I then swopped positions from that 4 miles, or so, right until the end. The sun was quite low in the sky so it was noticeable that your vision was occasionally marred, but hey, sun in November, I wasn’t complaining.

By about six miles we had a long and steep county lane to negotiate and I managed to run the vast majority of it. These small victories can give you a huge mental boost. The temperature certainly warranted my long sleeve helly whenever we reached the higher ground of the downs. Again the right kit choice can have a psychological boost to your mood. The section up to the 8 mile drinks station included a couple of cheeky short hills and then we turned right onto a track that’s on the edge of a large wide open field. I distinctly remember this trail from last years marathon because I was really suffering.

It’s at points like this in a race that you simply have to rely on your training, block out the pain and almost move into auto pilot, knowing it doesn’t last for ever. Joining the road and heading left back towards Meonstoke meant the 10 mile mark appeared on my garmin “deep joy”.

At this point course knowledge is a wonderful asset, I knew the worst was over and it was a case of hanging on. I pondered how close Alan was to me but seeing as he is quicker than me I fully expected his tall shadow to appear sooner or later !! With about a mile and  a quarter to go we were treated to a downhill section but as before the leaves needed respect what with the hidden potential dangers. Here, I became aware of heavy breathing behind me. Was it a crazed axe man, was it the leader from the marathon ? no it was the tall shadow I was expecting. We exchanged a few words of support and pressed on towards the last 300m that was around the football pitch.

I made my play as we entered the field and knew immediately I’d done the wrong thing as a stabbing pain in my calf shouted “you silly old bugger what are you doing going quicker in the last point one of a 13.1 mile race” That tall shadow eased by and I followed Alan in by about 50 metres. On the positive side, today took me through 700 miles in 2016. The 1,000 miles may be a step too far after time missed in the Summer but I’ll keep at it !!

I shook Alan’s hand, had a chat with Phil the organiser to thank him for a great race and just had time to shout encouragement to my friend Ros as I she was finishing and I was leaving. Also before leaving I had an interesting chat with the Xmiles chap about nutrition.

A great race in beautiful surroundings. This is why I run off road. The results are in and I came 90th out of 188. I hope to add a photo of me and Phil here but seeing as it was on his phone he’s probably celebrating a great days racing.

If you liked reading my blog please vote for irunoffroad here by scrolling down to my name. Many thanks http://therunningawards.com/vote/109/110#vote

4 thoughts on “Meon Valley Half”