Absolute Running (AR) is the name of a running shop in Gosport. This statement is factually correct but it’s like saying Mark Cavendish can ride a bike. The numerous events that AR host have had a recent addition this Spring/Summer and it’s called the Breakfast Club. Meeting at 8 a.m. on a Sunday and open to all abilities/clubs this #community based run sums up AR’s philosophy in many ways. Relaxed, friendly and all inclusive.

The starting point for our run was the Bayside Cabin, Stokes Bay, with its car park right on waters edge. As I stepped out of the car I was treated to views of the Isle of Wight and the sun starting to break through the clouds. I chatted to Tony Bennett who would be cycling due to an injury and we were soon joined by Terry Arnott, Gill and other AR / Gosport runners as well as Simon Hearnden from Stubbington Green and Simon Hanson a fellow Crusader. With Sunday being race day the turn out will vary each week & it was 12 today.

I spotted Nick, AR’s motivational owner and he assured me that the Breakfast club was a social, steady run as well as an appetiser to the Cabins offerings. Seeing as I’m on the way back from an injury this was exactly what I was looking for. The breakfast side of the run follows a nautical theme and ranges in size from a Dinghy, to the Gosport Ferry and all the way up to “The Titanic”, (forget the iceberg, this may well sink you) !!

The aim of the day was to run for half an hour out and back in our different pace groups. We set off from Stokes Bay and ran along Lee On Solent’s sea front. Today might not have been off road but it was certainly scenic. Nick, Terry, Gill and myself ran together and soon 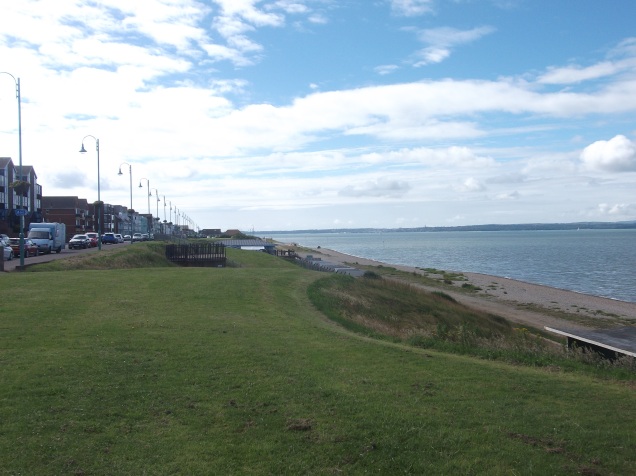 settled into a steady pace. The conversation flowed and we learnt Nick had been out at a charity evening the previous night were he’d met Eddie “The Eagle” Edwards. As we ran along the coast I was reminded just how lucky we are to live in this part of the world. A pleasant sea breeze cooled us down on the outward leg and we passed Graham (my daughters boyfriends father) running in the opposite direction.

After turning around and retracing our steps we caught up three of the ladies and then left the Lee seafront behind, heading for Browndown. When the two Simons caught us I commented that we didn’t hear them as they were both so light on their feet and in no time they eased away from us with effortless grace. Nick also explained the reason he’d started these Sunday runs was for people on their LSR marathon training later in the year. The car park is free up to 10am so it would just be a case of starting earlier. Back at the car park it was job done and time for a cuppa. We were joined by Kim and Emma on the Bayside Cabins patio area for post run refreshment and all agreed the hours run had been a great success. My hamstring felt fine & …… “I’ll be back” 🙂 Thanks one and all. 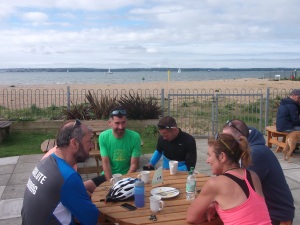