After three weeks of a cough/cold I was definitely feeling withdrawal symptoms from not running, so there was only one cure for this restless condition, “go run”. I was in need of some fresh air and a track to follow but as I had no idea how long I’d be out for I didn’t wear my Xmas present new trainers. My favourite saying is “your legs achieve what your mind believes” however, today, I was happy just to run.

I’m lucky to be only a mile and a half away from an old railway line that can then be linked with a numbers of fields, so that was my plan. For this tester run I decided not to take my garmin watch. 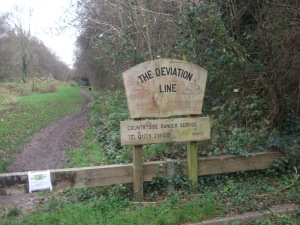 So, 15 minutes into my run I arrived at the disused railways line. As you can see from the photo above the conditions were muddy rather than messy and if you can’t have any hill top views a tree lined corridor to run along is probably the next best thing. After my urban mile and a half to get there, within about 5 minutes I’d seen a squirrel darting from branch to branch and I could hear birds chirping in the unusually mild weather.

The going was muddy but fairly good underfoot and it was easy to avoid the tree roots that cross the track as the fallen leaves from Autumn, which had hidden them before, were largely all gone. Before this route gets fully into the countryside there’s a surprise in store with a short dark tunnel that runs below the motorway and then as you emerge into the light the narrow track continues with fields either side.

Leaving the Deviation line is done by following a short muddy incline where the water runs off the fields. In a “very” short space of time the backs of my legs had just changed colour from white to brown. The incline takes you to a bridge over the new railway line and from there I ran through Knowle which is a small out of town development.

Picking up another trail that heads out of Knowle I ran along the outskirts of a large “as far as the eye can see” field and then turned off through a wooded section. With the trees having lost their leaves you feel like you are surrounded by large “stickmen”, this was at about 4 miles. I retraced my path and joined another trail that leads from Knowle heading back towards home. I pondered on the fact that I hadn’t really seen that many people at all on my travels, but then again, that does allow you to soak up your surroundings.

After taking care along a narrow section with barbed wire on the fence I was again running along the edge of a large field which I’m sad to say has been earmarked for development. The track along side the field was quite firm to run on until the last quarter of a mile. On reaching a waterlogged section to run through I decided to embrace the moment and just plough through the middle. You can only laugh as your feet sink below the water and it squelches out through the eyes of your shoe laces.

I reached the main road and bumped into Andy Lee from Stubbington Green Runners who was going in the opposite direction, we exchanged festive greetings and laughed at my trainers/legs as that’s where they were going. All that was left then was a trot home on the boring pavements.

In summary, the 8 miles of therapy were complete and I couldn’t resist a “dirty legs” photo by our Xmas tree after running past so many others. Slow and steady but the comeback has started. Countryside running ……  #loveit 🙂 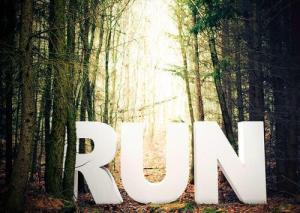 2 thoughts on “The Fresh air & Fields were calling me !!”