Front left to right, Chris, Gary, Paul, Pete, Howard, Paul, me, Lucy, Rod, Dave and Ed were the 11 Fareham Crusaders that took on the challenge.

Endurance is said to be, the ability to endure an unpleasant or difficult process, without giving up. As a marathon runner I can relate to this, however, as an off road marathon runner I can’t see what’s unpleasant about running through our “Great” British countryside on a cold and crisp day with it’s sights and sounds. OK there’s the mud and the hills (800m elevation) and the water logged sections but they are simply challenges to boost your sense of achievement when crossing the finish line.

Second Wind Running (SWR) were the hosts of the race and I can’t compliment them enough for the organisation and effort that went into a great day. “Hats off” to Phil and Teresa. SWR even organised the weather !! Saturday’s biting wind had gone and so had the rain from earlier in the week all we had to contend with was the 2 rising to 5 degrees.

Now that you’ve got an idea of my approach to this run, lets set the scene. Lucy drove Paul, Pete and me to the marathon “parking field” and it was only a short walk to the Meon Hall race HQ, Meonstock. These East Hampshire Downs and the wider South Downs National Park would be todays setting. Our 133 other competitors were made up of local clubs as well as runners from further afield and Twitter runners @ChiltonDiva, Ben Jarvis and Phil Hall. A special mention also goes to Paul Coates who only had stiches out on Friday but was keen to run. The hall was filled with a mixture of banter and anticipation. 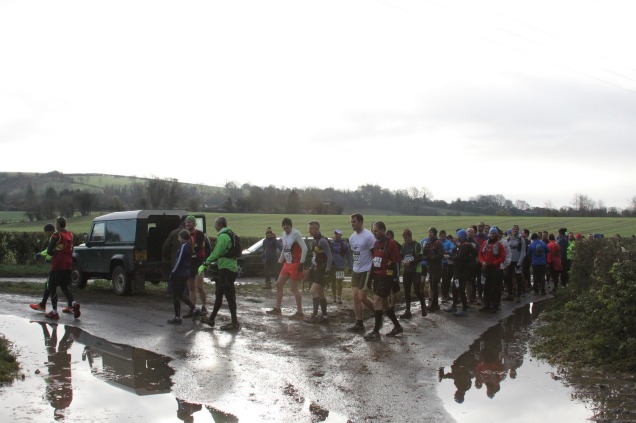 After our thorough race briefing from Phil Hoy we were off down a country lane and onto the old railway line via a large puddle. In no time we were being guided onto the South Downs Way (SDW) by Teresa and the lower trail that weaves its way up towards Old Winchester Hill (OWH). I use a technique I call “slip and slide” along these muddy trails i.e. you just follow one stride with the next and hope to stay on my feet !! 4 wheel drive trainers would certainly have come in handy.

Paul, Rod, Howard and I scaled some 450 feet of elevation working our way up the hill and as with every good hill we were rewarded with a fabulous view of Beacon Hill across the valley and the Isle of Wight in the distance . It’s fair to say hang gliders and buzzards are equally at home in this area. Pressing on along the SDW we met a mixture of trail and country lanes as well as this concrete path which seemed curiously out of place in such a scenic area. Running in the countryside really is visually rewarding.

Next we were heading North and up towards the ridge of the Downs. The approach to this exposed section of the route usually includes cattle but luckily not today. However, the cows trademarks were regularly dotted about in the clumpy grass. Dodging cow pats isn’t a skill you’d practice on running club night but it’s surprising how nimble you can be when the consequences are so shi**y !!

The sharp climb up onto the ridge was made more challenging with the clumpy grass but at least there was a clear trail to follow. More styles and gates were negotiated and after over an hour we actually went downhill. The better going underfoot was short lived and it was back into “slip & slide mode”. As we approached the back of Butser Hill (the highest point of the South Downs) I knew we had the most technical section of the route ahead. The 200 metres sharp climb is up a narrow trail that years of water has cut out a V shape in the soil down to the chalk. So at times I was planting a foot at an angle on both sides of the gully. The photo below was from a training recce. Most of us walked this, Howard flew up !! 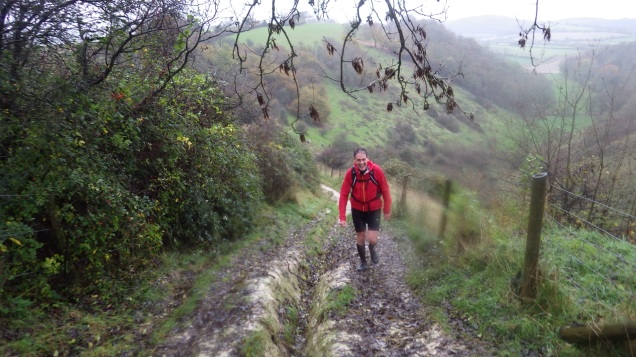 After the lung busting ravine climb a welcome gradual descent took us down to a waterlogged section with “refreshingly cold” water !! It was through this messy section that Pete and Ed passed me, with Pete shouting “just keep smiling Roger”. Harvesting Lane was next on the agenda at 13 miles. This lane is famous as a cycling Strava segment with 300 feet of elevation and gives your legs a different kind of work out after the grassy slopes. Paul and Rod were waiting for me at the top but I insisted they carried on as I knew I was holding them back. I re-joined the SDW and headed across to the Sustainability Centre and the huge houses opposite.

Heading down Chalk Lane (photo below) a good measure of restraint was needed what with it being very slippy and uneven. You’d think running downhill would be a welcome relief but were your legs have already been pounded the jarring is actually quite uncomfortable. Unscathed by the bottom of the lane it was a relief to get back onto country lanes. Having recced the whole route I knew the worst of the grass and mud was behind me but there was still one steep lane and a gradual climb across a field to come.

Emotions were high as I saw the 20 miles come up on my garmin especially as I knew the last 2 miles drop down to the finish. I was starting to get cold now after being out for some time but the thought of post race food and drink drove me on. Hydration drinks and gels do their job but they aren’t the same as a hot soup. I mainly walked the steep lane with flurries of running. Another of the excellent marshals spurred me on as I crossed over the road and onto a track across the fields.

The next downhill section again caused me pain but that’s when the thoughts in your head need to be strong, after all you can’t walk downhill !! I managed a slow but purposeful crossing of the gradual uphill field and this brought me to about 23 miles and the prospect of finishing. The sun was getting lower in the sky and the wind had started to pick up so it was time to press on and finish what I’d started.

At about 25 miles I was aware four of our Crusaders were closing in on me !! I couldn’t fend off Dave Fuller but was pleased to retain my 75th position out of the 130 finishers. On arriving we were greeted by most of our quicker Crusaders who were waiting to cheer us in. I stopped my garmin at 5.10 and grabbed the first chair I could see. Rod came over and offered me the second half of his soup, I really appreciated that Rod, thank you. I picked up my excellent medal and we all congratulated each other on a hard but hugely satisfying run. We knew Gary was still to finish but he would also be welcomed in a little while later. A great effort by Gary who only entered on Saturday. I asked Chris if this trail marathon meant he’d be doing more but I think he’ll be sticking to triathlons.

I have to say I was shattered but also on an extreme high of achievement. This is my 10th and probably hardest marathon what with the cold added in and even though this may read as hard work, it was enjoyable hard work. Paul had a “First wounded” award that Phil had made especially for him (the stiches were from a SWR recce run 2 weeks earlier) which was a great thought. I’m sure we will all be back next year.

Huge thanks to Phil & Teresa’s Second Wind Running organisation and marshals, also to my fellow Crusaders for making today a memorable one. 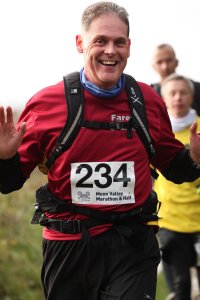 10K round trip to the sea and back. March 1st .... we are on the countdown to Spring :-) #running #springiscoming #sea #ukrunchat #hillhead #leeonsolent