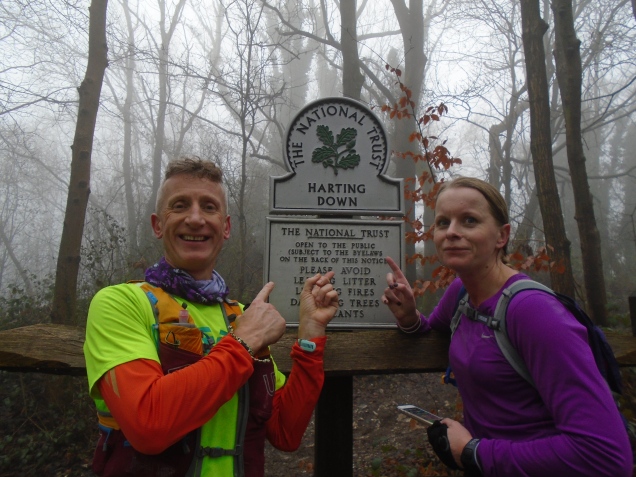 If you read the running magazines you’ll often see various percentages or multiples used to calculate your pace for that all important long steady run (LSR). Building up this solid aerobic base is the cornerstone to your training especially for distance races. What works for one person won’t for another so ultimately I’ve always found the best approach is to pick a few friends and just get on with it.

Today was a good example. Paul had run 18 miles the previous day, I was mindful of a hamstring tweek from ten days ago and our friend Ros is gaining in distance and confidence after some time out. In short, we had 16 miles planned along the South Downs Way (SDW) and no agenda for pace other than to enjoy being out in the countryside and clocking up time on our feet.

Starting from Queen Elizabeth Country Park at 8am we were confronted by thick mist which would largely steal the views on or run but at the same time it gave an unusual outlook on a route we knew well.

I hadn’t seen Ros since December and before her first marathon so it was great to hear her talk about how it went. It’s noticeable how you drop into a comfortable pace when chatting and at the same time the miles just fly by.

Once we’d run the big hill out of QECP there are about nine undulations until Harting Down and the glorious National Trust (NT) land that stretches along the top of the South Downs. A, LSR, will help you develop your own running rhythm which alters according to the conditions, elevation and terrain. Todays conditions underfoot were reasonable even allowing for a fair splattering of mud and puddles.

With the first 5 miles under our belts the National Trust sign was an obvious point for a quick refuel and the photo from the start of my blog. Once onto the NT land the sheltered trails change to wide open areas of grass land. 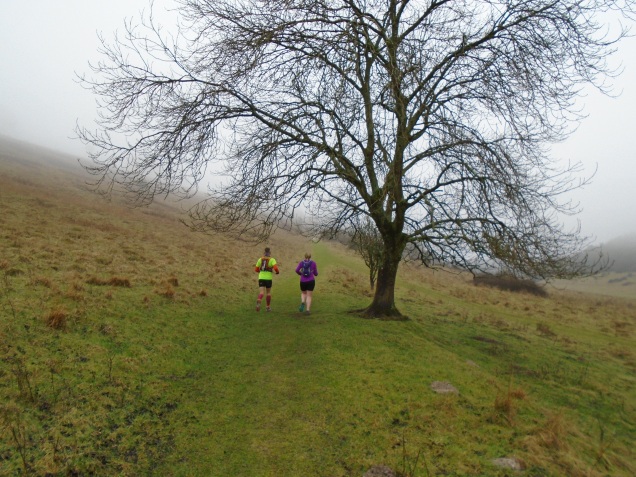 The wide open spaces are also home to some very hardly looking cows with hairy coats that look like they should be in Scotland rather than Hampshire. Turns out the National Trust are trialling these Scottish cows downs South Galloways

Needless to say the cows had no interest in what we were doing as I’m sure they are used to passers by !! The banter between the three of us is also a key ingredient that helps the miles pass by and I think this photo summed up the fun we had today.

The latter part of our outward leg was down and up a steep chalky trail that’s often photographed by SDW folk. The cattle grid was a reminder that we weren’t alone and as Ros took this photo of me we carried on for another mile or so before heading back.

The second half of the run was slightly slower but again it’s all about listening to each other and gauging how you are feeling. There’s a time and place for speed work but today was all about a steady pace, miles in the bank and knowing that we’d all benefitted.

Naturally you recover quicker from a steady run and this recovery process was helped by a pot of tea in the QECP café where we chatted to three Stubbington Green runners who’d also been out. A lovely run with great mates and 16 miles in the “running bank”.