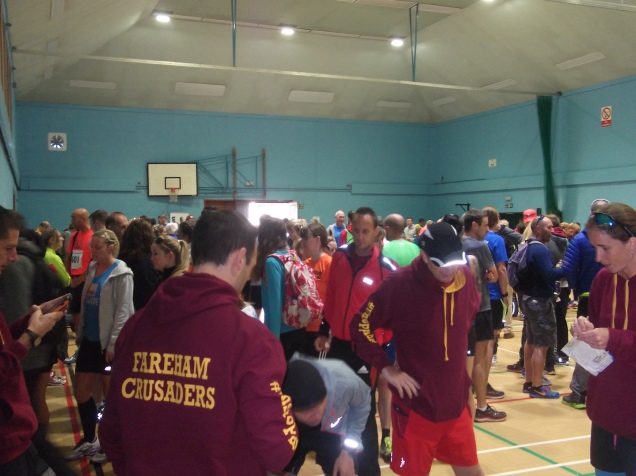 Solent Half marathon is part of the Hampshire Road Running League (HRRL) and it’s also located in the beautiful New Forest. A good proportion of the race weaves its way through Forestry Commission land as well as providing views across to the Isle of Wight. So, as stepping stones races to fitness go, it’s a very scenic one. I realised today that there’s still lots more work and miles to be done but at the same time being in a lovely location and sharing it with people you know is very enjoyable #getoutdoors !!

I decided not to take my camera on the run so it’s mainly words today. My fellow Crusaders and I met up in the sports hall along with about 500 runners from our local area. I haven’t seen some of the team for a while so it was good to catch up and say hello. I had a quick word with club mates Debbie, Katherine, Trevor, Mel, Paula, Karin, Phil, Ian, Andy & Amanda as well as Alun Hanford from Hedge End Runners who know.

We set off in bright sunlight and within the first few miles were running along classic New Forest narrow roads with views that extended far off to the left and right due to there being so few trees. At around 4 miles I saw Mike Daley also from Hedge End but on this occasion he’d ridden down to see the race. I was resigned to somewhere between 8.30 and 9 minute miles today so I just settled in and watched the miles tick over. I also watched four donkeys that were standing by the side of the road, they weren’t in the slightest bit bothered about us. The nature of the New Forest is that it’s free to roam for ponies, horses and donkeys.

By mile nine we had a great view of the Isle of White which was a lot closer than I’d imagined it would be. By mile ten we had a fairly steep hill and it was here that I ran past Hayley Sparshott from Gosport Road Runners. We have talked on twitter a number of times so it was great to say hello. We encouraged each other up until about eleven and a half and then Hayley disappeared into the distance.

I started getting cramp just before mile twelve so the moral of the story is … “more miles are needed” not that I didn’t know that already but sometimes you need a kick up the bum !! As a final reminder the race timer clicked past 2 hours with me about 100 metres from the end “harsh” !! However, all in all, the run has focused my thoughts for the coming weeks. Chatting with Hayley after, we both agreed it had been a testing day.

Great times from all our Crusaders, Alun from Hedge End ran a really good 1.27 and Graham Hoskins (Verity Runners) who I bumped into once I’d finished ran a really good 1.33 All in all a very scenic location with a tough last three miles that made for a good training run for me. Nice water bottle too, more practical than a medal !!

2 thoughts on “Solent Half : Running in the New Forest”